Tomorrow, Archangel Ancient Tree Archive will plant 75 champion coastal redwood saplings that have the potential to grow into the world’s largest trees. These trees hold champion eco-technology that filters air, soil and water and are capable of removing record amounts of carbon dioxide from the atmosphere. The nonprofit is working with the Presidio, a national site in San Francisco, to plant the saplings, which were cloned from massive ancient tree stumps, to form a “super grove.”

“We’re excited to set the standard for environmental recovery,” said David Milarch, co-founder of the Archangel Ancient Tree Archive. “These trees have the capacity to fight climate change and revitalize forests and our ecology in a way we haven’t seen before.”

Milarch and his team led an expedition to clone the saplings from five ancient tree stumps in northern California. Previously thought to be impossible to clone, the original trees are estimated to be up to 3,000 years old and up to 400 feet tall. The stumps range from 31 to 35 feet in diameter. By comparison, the world’s largest tree today, “General Sherman” in Sequoia National Park, is reported at about 25 feet in diameter.

We can only do this important work with your help.
GIVE NOW

The planting of a ‘Super Grove’ of 75 Coastal Redwood saplings cloned from local, ancient, massive trees is scheduled for 9am-noon, December 14, 2018, at the Presidio, San Francisco, CA. Each sapling’s DNA was sourced from local ancient tree stumps that were substantially larger than the world’s currently largest tree (known as General Sherman), which has a 25.1-foot diameter trunk.

“The Fieldbrook Stump, cut down by loggers in 1900, is all that remains of one of the largest coast redwoods that ever lived. It’s almost thirty-three across… without the bark, which would have added another two feet to the width.“ The Man Who Planted Trees: A Story of Lost Groves, The Science of Trees, and A Plan to Save the Planet, by New York Times Environmental Science writer, Jim Robbins. BUY THE BOOK TODAY and support our efforts.

“These trees have the capacity to fight climate change and revitalize forests and our ecology in a way we haven’t seen before.” – David Milarch, Co-Founder, Archangel Ancient Tree Archive

From the time cloning material is gathered it takes about 2 1⁄2 years to propagate the saplings and grow them to a size ready for planting. Because these saplings are 100% of the originating ancient trees, they are essentially from material that has been living for anywhere from 2,000 to +3,000 years. In their natural state the trees are ‘self-cloning’; decades prior to natural death a host tree will put out a near-perfect circle of clones, known as a ‘fairy ring’, about 20-feet from the trunk.

“These saplings have extraordinary potential to purify our air, water, and soil for generations to come,” Milarch said. “We hope this ‘super grove,’ which has the capability to become an eternal forest, is allowed to grow unmolested by manmade or natural disasters and thus propagate forever.”

Mature coastal redwoods can store up to 200-250 tons of carbon dioxide per tree. They are eco-cleansing filter systems for purifying our air, soil, and water. The trunks from those stumps ranged from 35-feet (with bark) to 31-feet in diameter. The source trees for the ‘Super Grove’ of 75 saplings are Fieldbrook (20 saplings), the Barrett Stump (25 saplings), Barrett Stump #2 (14 saplings), Ayers Stump (5 saplings), and Big John Stump (11 saplings). 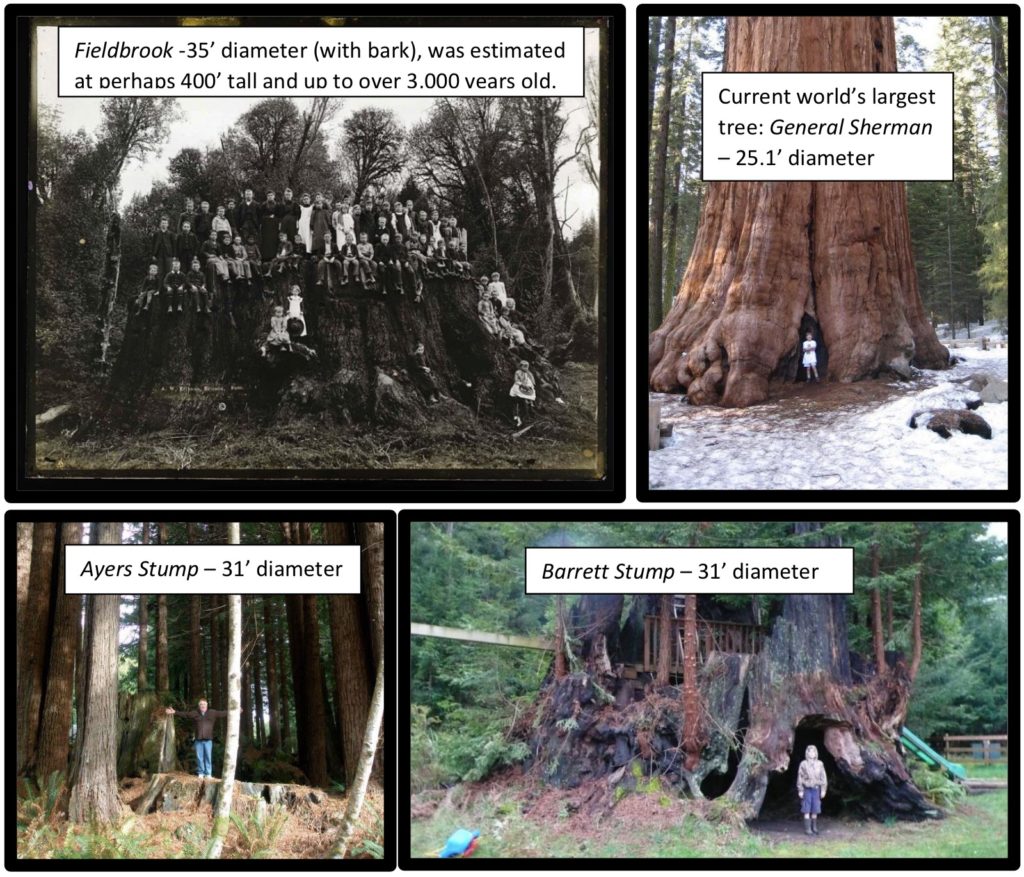