On Earth Day 2014, earth science students from the Interlochen Arts Academy planted Champion giant sequoias and an Archangel clone of the Hippocrates Sycamore on the Interlochen campus in northwest Michigan.

David Milarch attended and spoke with students about not taking part in the blame game for where we are ecologically, but challenged them to help replace the natural filter system on which we all depend. 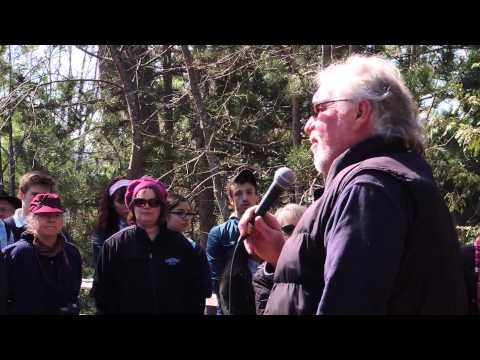 Interlochen instructor Mary Ellen Newport was instrumental in organizing the planting. In fact she incorporated the recent book featuring David Milarch into her Earth Science course.

The Man Who Planted Trees: Lost Groves, Champion Trees, and an Urgent Plan to Save the Planet by Jim Robbins chronicles not only the life’s work of Milarch, but describes the critical role performed by trees in our environment, and describes the devastation to our forests brought on by climate change.

The book’s hopeful message drives home the need to plant trees. Studying the book in class reinforces the primary themes of the course; that everything is connected in multiple ways and that photosynthesis is the key to understanding life on earth.

After reading the book in class, student led conversations lead to discussions about biophilia, biomimicry and nature deficit disorder.

ALSO: Listen to a song performed at the event by Interlochen student Emily Spradling.