The Associated Press published an article today about our recent collection trip to California. The story has struck a nerve – it is inspiring to see a nonprofit like Archangel Ancient Tree Archive working on solutions to climate change. Everyone should plant trees. Archangel is doing the most important work they can for the climate by collecting, propagating, and replanting clones of the world’s oldest, largest and fastest growing trees to capture excess carbon from our atmosphere. Enjoy. 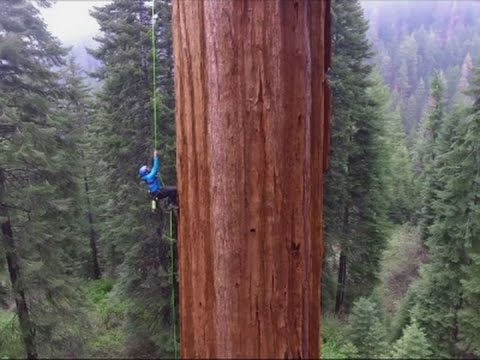 CAMP NELSON, Calif. (AP) — At the foot of a giant sequoia in California’s Sierra Nevada, two arborists stepped into harnesses then inched up ropes more than 20 stories into the dizzying canopy of a tree that survived thousands of years, enduring drought, wildfire and disease.

There, the arborists clipped off tips of young branches to be hand-delivered across the country, cloned in a lab and eventually planted in a forest in some other part of the world.

The two are part of a cadre of modern day Johnny Appleseeds who believe California’s giant sequoias and coastal redwoods are blessed with some of the heartiest genetics of any trees on Earth — and that propagating them will help reverse climate change, at least in a small way.

“It’s a biological miracle,” said tree climber Jim Clark, firmly back on the ground and holding a green sprig to his lips as if to kiss it. “This piece of tissue … can be rooted, and we have a miniature 3,000-year-old tree.”

“It’s really a race against time,” Milarch said. “If we start right now, we can go after climate change and reverse it before it’s too late.”

Sequoias growing in the Sierra are among the biggest and oldest trees on Earth, some nearly 300 feet tall and up to 3,000 years old.

Relying on common sense that he says is being borne out by science, Milarch, 66, believes their size and robustness make them ideal for absorbing greenhouse gases that drive climate change on the planet. He likens them to people who drink and smoke all their lives, yet thrive well into their 90s.