Will Genetic Clones of the World’s Largest Trees Help to Save the Planet? 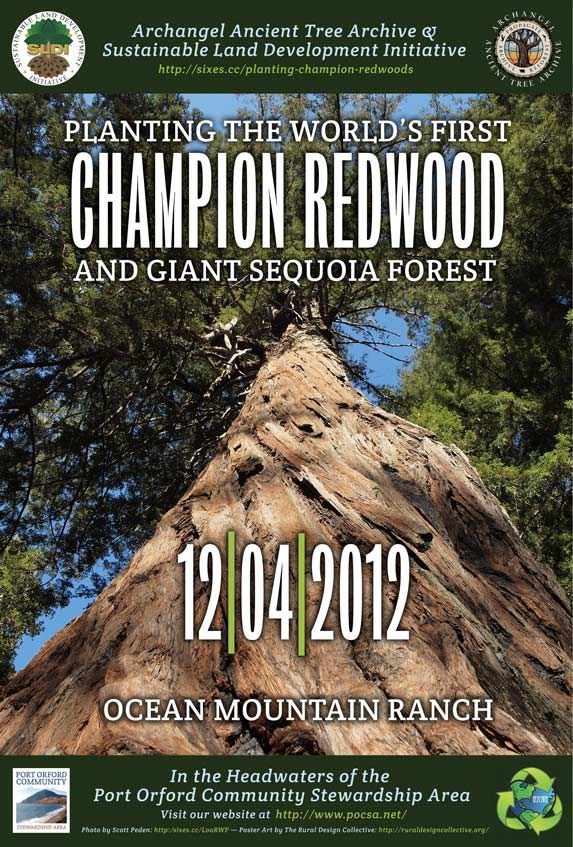 will lead a team in the historic planting, which will help preserve the genetics of the largest and oldest living organisms on earth in an effort to assist with the migration of the species during coming climate changes. Timed to take advantage of the seasonal rainy season, the planting will occur on December 4th, 2012, at Ocean Mountain Ranch, 65 miles north of the California border, located in the headwaters of the Port Orford Community Stewardship Area overlooking old growth forest and the first marine reserve on the Oregon coast.

David Milarch and his lifelong efforts to reforest the world are the subject of a new book by New York Times science writer Jim Robbins entitled The Man Who Planted Trees: Lost Groves, Champion Trees, and an Urgent Plan to Save the Planet.The book documents Archangel’s and Milarch’s mission to clone the champion trees of the world –- the largest, the hardiest, the ones that have survived millennia and are the most resilient to climate change — and create a kind of Noah’s ark of tree genetics.

Initially, many scientists and tree experts said it couldn’t be done, but now David’s team has successfully cloned some the world’s oldest trees –- including giant redwoods and sequoias. Among the dozens of unique individual tree clones to be planted in the first forest will be a duplicate of the Fieldbrook Redwood –- a giant tree cut down in 1890 that measured 32.5 feet in trunk diameter and would have surpassed the General Sherman Sequoia as the largest tree on Earth.

In addition to preserving champion tree genetics for future research, this old growth forest restoration is an integral part of an approved forest stewardship plan that will provide a focal point for ongoing model sustainability initiatives within the local community stewardship area and surrounding Curry County, Oregon — an economically depressed region that is, nonetheless, a rare place on earth where beautiful wild and scenic rivers tumble down through steep canyons and the tallest and largest carbon-sequestering forests in the world on their way to the mighty Pacific Ocean.
[pl_blockquote cite=”Dr. Rama Nemani, Earth Scientist”] “It’s amazing for one layman to come up with the idea of saving champion trees as a meaningful way to address the issues of biodiversity and climate change. This could be a grass roots solution to a global problem. A few million people selecting and planting the right trees for the right places could really make a difference.”[/pl_blockquote]

Click the image below for more information about the Archive Partnership with Sustainable Land Development Initiative and the home for these remarkable trees at Ocean Mountain Ranch.

MEDIA ARTICLES RELATED TO THIS PROJECT:

‘Ancient redwoods, giant sequoias to be ‘archived’ on Oregon coast’